In 10 editions of Super Series finals, 5 Indians have participated. 3 in Singles and a pair in Mixed Doubles. Saina Nehwal has been a regular at the Super Series Finals except 2010 when she did not qualify and 2016 when she just returned from an operation. In 2011 she reached the final, while in 2008, 2009, 2012 and 2014 she lost the semifinal. In 2013 and 2015, she was knocked out at Group stage. Indians have never won a medal but have two Runners up. While Saina has been in the finals once, India’s first finalist at Super Series Finals were V Diju and Jwala Gutta. 2nd seed Srikanth Kidambi and 4th seed PV Sindhu are representing India in 10th edition at 2017 Super Series Finals. 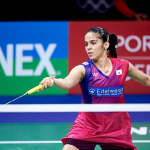 Finished 2nd at Group B winning 2 of the 3 matches losing only to group topper Tine Rasmussen (Denmark).
Saina Lost to Wang Chen (Hong Kong) in semifinals.

Saina won 2 of the three matches at Group A losing only to group topper Wong Mew Choo (Malaysia), who won the finals. Lost again the semifinal, this time to Juliane Shenk (Germany)

V Diju and Jwala Gutta won 2 of the 3 matches at Group B, losing to topper pair from England.
They won the semifinals 21-19 21-11 against Indonesian pair but lost the finals 11-21 18-21 against pair from Denmark.

4th seed Srikanth Kidambi finished 2nd at Group B losing only to group topper Jorgensen and winning against Kento Momota and Tommy Sugiarto. But, lost to title winner Long Chen 18-21 9-21 in semifinals.