Indians have a poor record at All England Open. It has been no different for others in All England Open 2017 also as Indian contingent was reduced to just 3. While none qualified for Main Draw, in the first round of Main Draw multiple players failed against the qualifiers. The silver lining was again Saina Nehwal, who knocked out the defending champion to enter another Round 2 at England Open. Sindhu entered 2nd round, and her biggest challenge is to overcome the dubious record of not crossing beyond at England Open. HS Prannoy played the longest match of the day to join both in Round 2. Except Kashyap none has accompanied Saina beyond Round 2. India will be looking for a change of fortune today. Three top seeds were knocked out in Round 1. Check the Indian results, and schedule.

Seeds Knocked out in Round 1

Indian Winners of 1st Round 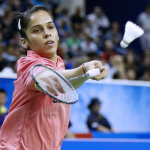 Indians Knocked out in 1st Round

While Sindhu and Prannoy meet their opponents first time, Saina has won her only match against the 63rd ranked German opponent. She won 21-15 21-10 at Thomas & Uber Cup Finals 2016.