Archery
Two medals assured as Men’s and Women’s Compound team enter final. To decide the color of medals, both to play Korea on Aug 28.

Athletics – Day of Silver and Success
Out of 5 finals they appeared, Indians won 3 Silver medals creating new records while both athletes in Men’s and Women’s 400m Hurdles qualified for finals. Dutee Chand in Women’s 10m, Hima Das in Women’s 400m, Muhammed Anas Yahiya in Men’s 400m won Silver medals while 19-year old Sreeshankar finished 6th in Men’s Long jump final despite his personal best of 7.95m. Lakshmanan Govindan won Bronze but was disqualified because his foot touched the inside the track in Men’s 10,000m. 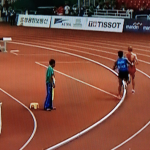 Badminton
Saina and Sindhu created histoby as India ensured first time medals in Women’s Singles. Before them only Syed Modi has won a medal in Singles event at Asian Games. Both are chasing history now as Indians have never reached the finals of any Badminton event at Asian Games.

Canoe
Indians failed to qualify for finals in any of the two events they participated today.

Shooting
Indians failed to qualify for Skeet finals of both events and signed off as the best Sporting squad of Indian contingent.