At 2018 Asian Games, when India and Pakistan play for their first ever Bronze medal contest they will be locking horns for the 15th time. 8-time Gold medal winners Pakistan are clearly way ahead, but Indians have not only won more since 2002 Asian Games but even outside Asian Games Indians have dominated Pakistan since 2010 like never before winning more and losing not so many. Even at Jakarta Asian Games, while both slipped during semifinals at Group stage Indians have been on rampage breaking many records. But, when it comes to India vs Pakistan do statistics and records matter? While Pakistan a win will increase their 3-Bronze tally to 4 at 2019, for India it will help create a new record of maximum medals at Asian Games. While Pakistan Men’s Hockey team has never returned home without a medal, Indian Men’s team has never finished 4th at Asian Games. Who will run away with Bronze in 2018 Asian Games!!

Performance of Both Teams at Asian Games
While Pakistan is the King of Asian Games with 8 Gold, India has certainly been the second best in terms of final although South Korea has won a Gold more than India. Both India and Pakistan Men’s Hockey team have missed a medal only once since 1958 Asian Games. Check their individual performance at every Asian Games. 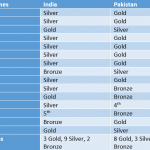 With the Bronze medal match have a bigger historical value, the match will certainly have competition at its best.