Tintu Luka is set to participate in Women’s 800m Qualifying round at Rio 2016. Coached by legendary PT Usha, she is the 3rd women and 9th overall Indian to participate at Olympics in 800 m race, which is India’s 4th best represented Athletics event at Olympics. Among 13 occasions, only once an Indian has reached 800m Olympics final. Being the queen of Asian events for many years now, and based on past performances, multiple international medal winner Tintu Luka appeared the best Indian athlete to expect a medal for India!! She finished 29th at Heat. Check India’s past 800 m results, how she qualified, her short profile and her challenge at Rio Olympics.

Indian Record at Athletics Events in Olympics: 3000m Steeplechase
Indian Record in Athletics: 214 Athletes, 24 Olympics, 2 Silver, Only 12 Final
Indian History at Summer Olympics: Performances in Every Olympics
History of All Sports Played at Olympics by India
Indian Medals In Olympics: When and Who Got It!!
Indian Schedule and Results for Rio 2016: List of Daily Events

Qualification for Rio: Season’s best of 2:00.95 to finish seventh in the first heats at the 2015 World Athletics Championship, crossing the Rio Olympics qualification time of 2:01.00.

Born on 21 April 1989 at Valathode Karikkottakary, Iritty, Kerala, India, she is coached at the Usha School of Athletics, Koyilandy, Kerala, and is supported by Olympic Gold Quest.She was awarded Arjuna award by Government of India in 2014.

800 m Statistics at Olympics for India

Other Indians in 800m at Olympics

Tintu Luka at Rio Olympics
At Rio, it is 3 step road to medals. Women’s 800 m at Rio 2016 has 8 Heats in Qualifying round wherein 65 athletes are participating. Tintu will run for a place in the Finals at Heat 3 in Round 1 with 7 more athletes from 7 different nations. 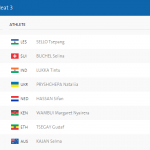 She gave her Season’s best but could not qualify for the semifinals. Ironically, she had lesser time as compared to the top two qualifiers from Heat 7.

Besides that she won two Gold medals and two silver medals in 4 X 400 m relay. at Asian Games, the team clocked 3:28:68 to break the Games Record.