As World Wor II engulfed the World, after 1936 it took 12 years to organize another Olympics. By that time, India also became Independent. Ironically, it has to send its first Olympics team to the country from which it gained Independence. But, the result was no different for the Men’s Hockey team. Without Dhyan Chand and other old players, the new Indian team won the Gold medal for the 4th consecutive Olympics. 3 new Sports were added to India’s Olympic participation list.

Indian Performance in Every Olympics
History of All Sports Played at Olympics by India
Indian Medals In Olympics: When and Who Got It!! 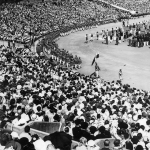 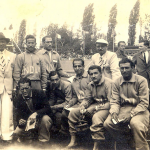 Football: Played one match and knocked out

In the knock-out format, India lost 1-2 to France in the 1st round.

Hockey: 4th Gold for India
Dhyan Chand refused the request to be part of this team, but Indian team still won their 4th consecutive Gold. Netherlands challenged in semifinal, otherwise rest of the matches were easy wins as they scored 25 goals in 5 matches and conceded just 3 goals.