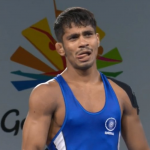 Indians won medals in all four events of the day taking lead against other nations. Rahul Aware won the first Gold medal of Wrestling, while Sushil Kumar created historby by winning third consecutive Gold medal at CWG. Babita Kumari lost the final to settle for silver while Kiran won Bronze. 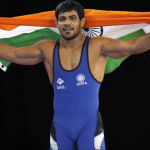 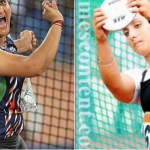 Seeman Antil and Navjeet Kaur Dhillon finished second and third behind Australian in Women’s Discus throw as India earned a Silver and Bronze medal. This was the first medal from Athletics squad. 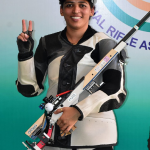 Morning started with a medal from Shooting in the only event that had medals today as Tejaswini Sawant won Silver in Women’s 50m Rifle Prone.

Badminton
Indians won all the matches as 9 of them entered the quarterfinals in multiple events.

Table Tennis
Paddlers won all the matches but one where Madhurika lost in Round of 16 as Indians made a big presence in the quarterinfals and semifinals. In Women’s Singles quarterfinals Manika Batra won while Mouma Das lost. Indians have assured a medal in Women’s Doubles that will have the medal events on Day 9.

Hockey
Indian Women’s Hockey team fought hard but were unlucky to lose the semifinals by a solitary goal against the hosts, Australia. They will now play for Bronze on 14th April.