Day 4 was an eventful day for Indian Commonwealth Games contingent as Shooting and Table Tennis joined hands with Weightlifting to take Indian tally to 7 Gold Medals, 2 Silver medals and 3 Bronze medals. Indian weightlifters continued their dominance winning 2 medals again in a day. Shooting, as expected opened with a big win and 3 medals on its Day 1. But, the most surprising Gold came from Table Tennis Women’s team and then Mary Kom ensured a medal by winning QF and both the Hockey teams won their group matches. 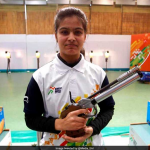 Manu Bhaker continued her magical entry to the Shooting world grabbing Gold medal with record points in Women’s 10m Air Pistol as Heena Sidhu made it an Indian double of Gold and Silver in the event. Later Ravi Kumar grabbed Bronze in Men’s 10m Air Rifle to complete a three-medal entry for Indian Shooting. In the other medal event, Saniya Sheikh missed Bronze by a whisker finishing 4th. India leads the table after 3 Medal events on Day 1. 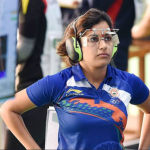 Shooting Results for India on Day 1

Weightlifting: 1 Gold, 1 Bronze
Weightlifters continued their dominance taking their overall tally to 8 medals winning 5th Gold and 2nd Bronze of their squad on Day 4. On every day of Games, they have won two medals and tomorrow is the last day of Weightlifting.
Punam Yadav won historic Gold in Women’s 69kg. She had won Bronze during the Glasgow 2014.
Men’s 94kg saw Vikas Thakur winning the Bronze. He had won Silver at Glasgow 2014. 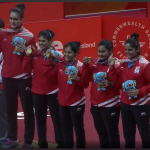 Hockey: 2 wins
Women’s Hockey team shocked favorite England 2-1 coming from behind as England took lead in the first minute, while Indian Men’s team ensured they do not lose to Wales. They kept cool and somehow managed to win 4-3 as Wales kept equalizing every goal, except the last one.
Dilpreet Sing (16′), Mandeep Singh (28′), Harmanpreet Singh (57′) and SV Sunil (59′) scored for India.
In Women’s game, Navneet (42′) and Gurjit Kaur (48′) scored goals for India.

Boxing: 2 wins, 1 loss
Mary Kom announced her entry to first Commonwealth Games with a quarterfinal win that ensures at least a medal for her. Vikas Krishan also won to enter Round of 16 but Lavlina Borgohain lost by split decision 2-3 in the Women’s 69 Kg Quarterfinals. 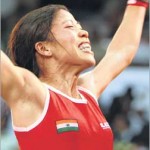 Swimming and Athletics: Sajan Prakash qualified for semifinals but could not enter the final. Athletics saw Tajinder Pal Singh Toor qualify for Shot put final to be played on Day 5.

Basketball and Cycling: This was the last day for Track Cycling and Indians failed to reach anywhere close to winners. Men’s and Women’s Basketball team lost. They are yet to win a match.