Weightlifters signed off with a Silver finishing on top of the table with 9 medals including 5 Gold medals. Shooters continued to dominate with two twin finish that fetched a Gold again. Table Tennis and Badminton teams added 2 Gold medals and helping India finish third after Day 5 with a medal tally of 10 Gold, 4 Silver and 5 Bronze medals. 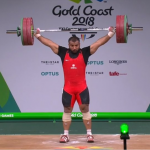 On the last day, out of 4 events weightlifters won a Silver and finishing 5 days of medal hunt with overall 9 medals and topping the Sports event of CWG 2018. Today, Pardeep Singh won Silver in Men’s 105 Kg. In the last event of this Sports, in +105kg Gurdeep Singh finished 4th. Tomorrow Para Powerlifting will see Indians in action in 3 events. 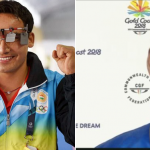 Shooters had three medal events today. Jitu Rai and Mehuli Ghosh broke Commonwealth Games record. While Jitu added another Gold to his feather, Mehuli had to be content with a Silver as she lost during the Shoot-off. Om Prakash won Bronze, while Apurvi Chandela won Bronze. She had won Gold medal in Glasgow 2014 CWG. 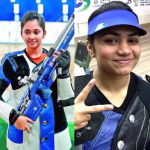 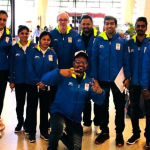 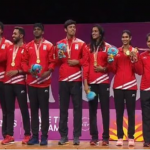