The first three days at Eden Gardens in the first test match has been more about Sri Lanka. While first Indians were bowled out for their 2nd lowest in India and overall 4th lowest test score against Sri Lankans, the visiting batsmen with three 50s, specially by Herath gave visitors a rare 122 run lead in India. After 3 and half days, only two results appeared possible. Either a draw, thanks to the weather ruling the first three day or the first test win for Sri Lanka on Indian soil. But, the first ever century stand since 2000 for Indians in second innings has put Sri Lankans on back foot, just on two sessions. Now, on day 5 unless there is an unusual Indian collapse, its the Sri Lankans who would be more worried to save the test now although repeat of 9-0 looks tough now.

Lakmal improved the 2001 record of 40-ball first spell without conceding a run by the West Indies bowler.
9 overs by Indian spinners (Ashwin 8 and Jadeja 1) was the least Indian spinners ever bowled.
All 10 wickets by Indian pacers was only the third instance after 1983 and 1982 at home.
1st time since 2010 when Indian openers had 100+ partnership in 2nd innings.

Indian first innings saw delayed start on Day 1 and then finished in multiple breaks as they scored 172 runs, 5 more runs than their lowest score at home (Chennai) against Sri Lankans. Only Pujara could score a half-century (52) as Lakmal bowled a rare spell in test cricket that had no runs scored in first 46 balls grabbing 3 wickets. First ball wicket of KL Rahul on duck was followed by Dhawan (8) and then captain Kohli’s rare duck. Lakmal later grabbed Bhuvneswar Kumar (13) to finish with 4/26 in 19 overs, 12 of which were maidens. Opening bowling from other end, Gamage had 2/59 grabbing India’s 2 of the 3 top scorers, Pujara (52) and Shami (24). Dasun Shanak (2/36) grabbed wickets of Rahane and Ashwin, as both scored 4 runs each and spinner Dilruwan Perera sent back Saha (29) and Jadeja (22) in the same over. Umesh Yadav remained unbeaten on 6 runs. 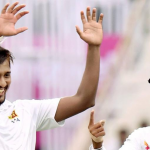 As Sri Lankans continued aggression even in batting, it paid dividends as they had a 122-run lead finishing at 294 in 84th over. Opener Samarawickrama (23), wicketkeeper Dickwella (35), captain Chandimal (28), Lakmal (16) scored handy runs while Shanaka was the only one to be gone for a duck. Other opener Karunaratne (8) and Diluwara Perera (5) reached single digits as Gamage was unbeaten without adding any run. Thirimanne (51), Angelo Mathews (52) and Herath (67) scored half-centuries as Indian bowlers kept on breaking records. In the records created by Indian pacers Bhuvneswar Kumar (4/88), Shami (100/4) and Umesh Yadav (2/79) shared the rewards while Ashwin (0/13 in 8) and Jadeja (0/1 in 1) went into the records books as the least used spinners by Indians ever.

While the first innnings of both teams saw 99 run partnership for third wicket between Thirimanne and Angelo Mathews as the biggest partnership, and Sri Lankans were looking at a possible rare test win on Indian soil, the second innings of Indians showed why they are World No. 1. Openers KL Rahul and Shikhar Dhawan added 166 runs for the first wicket as aggressive Dhawan went for 94 runs. KL Rahul (73*) scored his 9th half-century in last 13 innings this year. 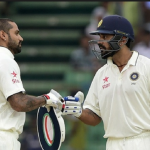 With rain disappearing and sun coming out batting looks less challenging. With Indians leading by 49 runs with 9 wickets in hand, unless th epitch crumbles on last day a result appears impossible. If the pitch stays firm, then one of the teams must have complete batting collapse to produce 6th consecutive test result at Eden Gardens Park. Which team could it be!!