Quarterfinal is more than the expected result for a 9th seed. But, PV Sindhu wouldn’t believe on rankings when she plays 2012 Olympics Runners up Wang Yihan, whom Sindhu defeated in their last meeting. Wang, the top seeds at London Olympics defeated Saina Nehwal in semifinals of 2012 Olympics, but lost the final to Li Xuerui (China). Emerging winner in their last meeting at Denmark Open may give enough confidence to Sindhu in Quarterfinals.

At Rio Olympics, Wang is seeded second behind Carolina Marin. In 2012, top seed Wang has defeated 4th seed Saina in straight sets to reach the her only Olympic final. 9th seed Sindhu has a commendable record of 2 wwins and 4 losses against Wang, including the win in their last meet.

Head to Head Sindhu vs Wang 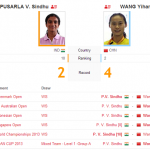