When PV Sindhu plays the Gold Medal match against World No. 1 Carolina Marin on Friday, purists would feel happy with Silver as Carolina has crushed all even outside Olympics. Statistics would show the huge challenge revealing how Sindhu trails Carolina 2-4 in career meets before. But, trailing by 2 would surely make Sindhu smile and Marin tensed, who will be also playing her first Olympic final. She has already made merry over the deficit of number 2 in her dream run to the Finals.

Rio 2016: List of World and Olympic Records Created by Gender, Sports, Countries and Days
Indian History at Summer Olympics: Performances in Every Olympics
History of All Sports Played at Olympics by India
Indian Medals In Olympics: When and Who Got It!!
Indian Schedule and Results for Rio 2016: List of Daily Events

The enthusiasts and believers have all the reason now to feel happy about this deficit of 2. Besides exceptional performance at Rio it cannot be just a coincidence that Sindhu has trailed all three of her opponents in knockout rounds by the deficit of Number 2 in previous career meets. She humbled all of them from Round of 16, to Quarters and then in the semifinal too.

What is the value of No. 2 for Sindhu?
9th seed Sindhu played against superior seeds in her knockout matches. First was 8th seed Tzu Ying Tai from Chinese Taipei in Round of 16, then 2nd seed Yihan Wang (China) in Quarterfinals and today it was 6th seed Nozomi Okuhara from Japan in the semifinals. What was her previous career record vs them?

She won against all of them in straight sets. 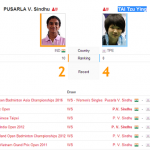 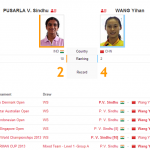 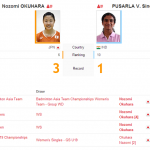 Road to Final for PV Sindhu in Badminton Women’s Singles

Now, on Aug 19th in the final of Women’s Singles, 2-4 career record against Carolina appears an opportunity to make Sindhu the first Indian woman of any sports to grab the Olympic Gold medal. 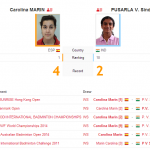 Coincidences and numerology gives more reasons to the fans to feel confident. Sindhu by her performance and guidance of legendary Gopichand is all set to complete the mission to Gold at 7.30 p.m. (IST) at Rio 2016 Olympics.