At the start of tournament, captain Mithali Raj set first target as semifinals. Indian teams not only met that target but also reached historic second final of Women’s World Cup 2017. Now, for the first time billions are behind the Women Superheroes and awaiting their first World Cup title to be played at Lord’s against the hosts today. The achievement has not only bagged 7 leading performers but also brought Indians close to 4 more records too. Check their road to finals and also their overall records so far. Could they be the 4th team to win the World Cup? All the best to Indian Cricket team!

Mithali Raj became the only Indian captain in cricket to lead teams to two such finals. Mandhana was the star performer of first two wins followed by Ekta Bisht and Deepti Sharma. Then, first Mithali Raj’s century got them the semifinals which was won by first ever Indian century by Harmanpreet against the 6 time champions Australia. Player of the matches just tell half the story as almost all the matches were won by bowlers contribution who emerged better than opponents. The spot in final certainly belongs to the entire team. The trio of captain Mithali, Harmanpreet and world no. 1 Jhulan Goswami would hold the key. 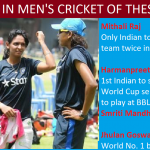 62 maximum wickets by any team in the tournament.
4 Maximum teams bowled out by any one team.
14 Dismissals: by Sushma Verma (almost double than 2nd position 8 by Aussies Healy)
5/15 by Gayakwad vs NZ is the best bwoling performance by any bowler. Ekta Bisht has second best (5/18)
4 players scoring centuries (Joint best with England whose 4 have scored 5 centuries)
7 100+ partnerships is highest by any team

Records in Sight for World Cup 2017

Top Scorer of tournament!
Mithali (392) and trio of England (Beaumont 387, Captain Heather Knight 363 and Sarah Taylor 351) contest to be on top ahead of 404 from Perry (Aus)
Top Wicket taker!
3 wkts more required by Deepti Sharma so far to equal Niekerk (15 wkts) of South Africa.
14 centuries in WC 17: 5 centuries by England, 4 by India
Sciver (Eng) is the only one to have hit 2 centuries in this WC.
9 6s by Harmanpreet is 3 less than maximum 12 sixes hit by Lee of South Africa in WC 2017
Most Catches: 6 by Jhulan Goswami is 2 less than highest 8 by Sattenthwaite of New Zealand

Performance so far by Indians
Player of the matches: